Tag Archives: If You Build it They Will Come

In the short (5 1/2 years) time I’ve been calling myself a writer I’ve met many other writers. Some in person, some in cyberspace – and the variety of opinions I’ve seen and heard from them on how to write is fascinating.

Literally as many attitudes as authors.

Naturally I have mine – and I’m not usually shy about sharing them (ipso facto, this blog).

One of my writer friends, Steve Boone, bass player for the 60s rock band The Lovin’ Spoonful, recently shared his thoughts on a speech given by Bob Dylan at the MusiCares Awards . Another writer friend, Becky Pourchot, took a piece of the speech and shared it on facebook, citing how applicable it is (or at least should be) to writers.

The portion of Dylan’s speech that appealed to her was this;

“Last thing I thought of was who cared about what song I was writing. I was just writing them. I didn’t think I was doing anything different. I thought I was just extending the line. Maybe a little bit unruly, but I was just elaborating on situations. Maybe hard to pin down, but so what? A lot of people are hard to pin down and you’ve just got to bear it. In a sense everything evened itself out.”

She followed Dylan’s quote with this thought of her own – “This is a key element when we write, I think. I often worry ‘Are people going to get this?’ It’s tempting to think about market, audience. Write for you and everything will follow.”

She then cited a movie quote that I use quite often, from the classic baseball movie “Field of Dreams”…

“If you build it, they will come.”

It’s true – I say that all the time in reference to writing and marketing.

When I say it my point is usually more to the marketing aspect of writing than the actual writing, as in – put yourself out there, build a brand and relentlessly market that brand. Convince the book buying public that you are something worthy of their time – and money.

Since I’m writing this post on my lunch break at work and NOT from the deck of my yacht, my marketing strategies are not exactly the stuff of legend, however I still believe that in today’s cyber-society it is completely possible to create interest in your brand with aggressive marketing.

It has worked for me in the sense that many more people know my name today than did in 2009 when my first novel was released.

So – yes…by all means build it – and they will come.

The difference between my use of the phrase and Becky’s perception of my use of it is this;

In her comment she implied that the phrase gives writers license to write what they feel, without regard for whether it is “acceptable” in the market. Be true to your writing spirit and, if your heart is pure, the audience will find you.

It sounds good in theory, but I’m afraid she misunderstood my interpretation of the quote, so, in order to clear things up I’m going to resort to a quote from Bull Durham – another great baseball movie.

In the movie, veteran catcher Crash Davis (played by Kevin Costner) is charged with taking young, brash and arrogant rookie Ebby Calvin “Nuke” LaLoosh (played by Tim Robbins) and giving him a little maturity before he is promoted to “the show” (the big leagues).

In one scene, Crash points out to Nuke that his (Nuke’s) shower shoes have fungus on them. Nuke is annoyed that Crash is interrupting his massage with such trivialities, and confused about why it matters, to which Crash replies… 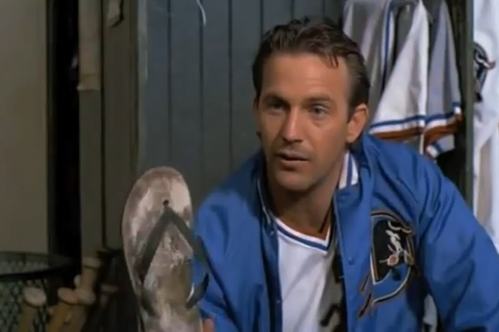 The look on Nuke’s face after the lecture is priceless, and if you’ve never seen the movie your life has a serious void…but I digress.

My point is this…

Yes, writers should write from the heart and they should be true to their spirit, however, this is not license to write crap and tell yourself the only reason it isn’t selling is because it hasn’t found its audience yet.

The truth of the matter is, you are writing to sell your work – whether you admit it or not (here are my thoughts about that). Logic (and the laws of economics) dictates that if you want to sell something you must create something of interest to the buyer(s).

I hate to burst your bubble, Dorothy, but you write for the audience first – and yourself second.

Call me a sellout, call me insincere, call me a traitor to the craft, but I am not afraid to admit that if there were no hope of selling another book, I would stop writing…because as much as I love writing, I put too much effort into it – too much of myself – to give it away in the hope that maybe it will eventually be discovered.

So, go ahead, write for yourself…in the meantime, don’t give up your day job.