Time for Another FREE Book!

From August 15 – 19 my most recent novel Doomed to Repeat is FREE!!

…actually – the last question has nothing to do with anything, but who doesn’t like pie? 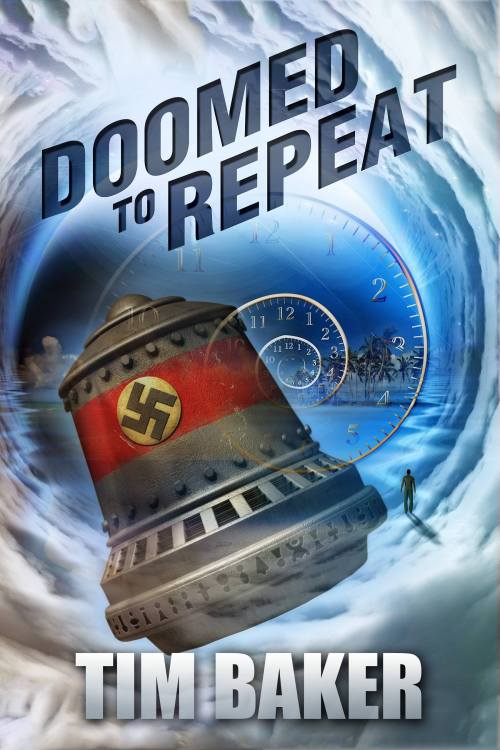 Doomed to Repeat, my 11th novel, was released in November of 2018 and has been highly praised!

The story begins in a top-secret Nazi bunker during World War II, but soon lands in modern day Flagler Beach where three men wash ashore – two with amnesia, one dead.  Ike (our hero) tries to help the survivors, but when the dead body is discovered, a routine autopsy results in an international incident. Now Ike has to figure out why the FBI, the KGB and a racist politician are all after his new friends.

It’s a fast and fascinating read, the ending of which may leave you with more questions than answers…

Get Doomed to Repeat FREE from August 15th thru the 19th!

It’s About Time!! (Literally – Doomed to Repeat is All About Time – and it’s Available Now)

There’s a saying about boat ownership I’m identifying with right about now  – “The two happiest days of a boat owner’s life are the day he buys it, and the day he sells it.”

Having never owned a boat (yet) I can’t speak to the veracity of that claim, but I can say this…two of the happiest days for an author are the day he conceives of a new story idea, and the day the story is set loose on the world in the form of a new book.

Along the way there are highs and lows.

There are days where you think you’d better send the tux to the cleaners for that inevitable stroll on the red carpet…and days where you feel like donating your computer to charity because it is the vessel which contains the worthless drivel on which you have wasted countless hours.

In the end, it’s always worth it, because you never get tired of releasing a new book.

I wouldn’t put it up there with the pride you feel when your child graduates from college, but it’s at least as great as that day where you no longer need to buy diapers for him/her!

Let’s get to the meat of this here sandwich.

Ladies and gentlemen, I am proud to announce the release of my eleventh novel (16th book) Doomed to Repeat!

From the day I released my first novel, Living the Dream, I’ve wanted to write at least one historical fiction story – and I can now scratch that off my writing bucket list.

I may even do it again. Somewhere around the time I was writing my second book I had an idea for a story whose beginning takes place during the Civil War…so that may become a reality in the near future.

In the meantime – Doomed to Repeat is available for purchase as a paperback, and for your kindle simply by clicking here or on the cover image above.

No spoilers, but the story begins in a top-secret bunker in Nazi Germany, and ends in current day Flagler Beach, Florida. Ike and Company have their hands full dealing with a corrupt US Senator (perhaps a bit redundant), two strangers who show up on the beach with amnesia, a mystery corpse, the CIA, and the KGB.

The advance reviews have been overwhelmingly positive so I’m pretty confident it will be well-received.

I hope you enjoy it! 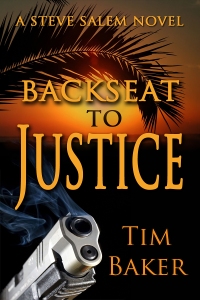 What Goes Around Comes Around – and it’s FREE BOOK Time Again!

My latest novel Doomed to Repeat is through the editing phase and is now being formatted. Release is probably a week away – two at most.

What that means is you get another FREE BOOK! And possibly another one next week!

This week the featured selection is Full Circle.

Full Circle has a very long history which you can read about here…but to make a long story short, it was my first attempt at writing in 1988. It was shelved, uncompleted, less than six months later, dragged out of mothballs in 2015 and rewritten from scratch, keeping only the main theme from the original.

The story is not much of a departure from my usual stories, although Ike only makes a brief cameo appearance. The one significant difference between Full Circle and my other work is the role played by Karma.

Karma is a funny thing.

We all want to believe in it, but at the same time we all know somebody who deserves a bit of comeuppance, yet never seems to get it. When people say to us ‘Don’t worry, Karma will take care of them’ we can only reply ‘When!’

Sometimes it seems that Karma is right up there with Santa Claus and The Great Pumpkin…you can only believe in them for so long without proof.

Well, I won’t tell you that Full Circle offers proof of Karma’s existence, but I will tell you it certainly offers a healthy does of hope! Sort of the way the empty glass of milk and the cookie crumbs kept your hopes alive for the existence of the big man in the red suit!

So, there you have it…Full Circle is Free from midnight, Tuesday November 6th, 2018 (Monday night…Tuesday morning – however you want to look at it) until midnight, Saturday November 10th, 2018.

Note: This offer is not affected by daylight saving time!

One final thing…this is week #6 of the 2018 Pre-Doomed-To-Repeat–Release Giveaway and so far I have given away almost 1,500 books!

I’ve also gotten several very nice reviews, and as any author will tell you – that makes my day!

Can You Believe it? More Free Books!!

What’s better than a #FREEBOOK?

It’s been a month of giving and I’m not stopping yet!

First – there is the Pre-Doomed-To-Repeat–Release Giveaway – which is now in its fifth week, and this week’s featured selection is Eyewitness Blues.

Eyewitness Blues is the story of Martin Aquino, a young man who believes the only thing that can save him from the black cloud hovering over his life is the witness protection program.

This doesn’t stop him from trying though – and that’s where the fun starts!

As promised last week – because the Boston Red Sox won the World Series we have yet ANOTHER #FREEBOOK to celebrate!

I understand that not all of you are Sox fans…that’s okay, I still want you to have a copy of Blood in the Water for FREE! (If you really hate the Sox you can pretend it’s just another #giveaway.)

Blood in the Water is the second installment in my Steve Salem series.

Flagler Beach P.I. Steve Salem and his partner Val came onto the scene in the extremely popular Backseat to Justice.

Blood in the Water has them trying to solve three mysteries in one!

If all goes to plan we will have one more giveaway before the release of the highly anticipated Doomed to Repeat – so stick around!!

Time to Take Care of Some Unfinished Business – Another #FreeBook

Here we go – Week #4 of the Pre-Doomed-To-Repeat-Release Giveaway!!

I hope you’re enjoying the free books – and if you’ve already read them – I hope you’re telling others to get them while they’re free!!

Before we get to the next giveaway – here’s a little info for those of you wondering how long the giving will continue;

As you know – I started the giveaway the day I sent my new book – Doomed to Repeat – to the editor.

The plan is to give away one book per week until Doomed is released.

My editor – the amazing Karin Nicely – has returned the manuscript to me with her first round of edits. I am going through the edits and incorporating them into the work – once I finish (should be by the end of the week) I will send it back to her for round two. The process will repeat and possibly again for a third round if necessary.

Bottom line – I estimate two or three more weeks of free books…so get ‘em while they’re hot!! And don’t forget to tell your friends, family, coworkers, Uber drivers and strangers on the street about them!! 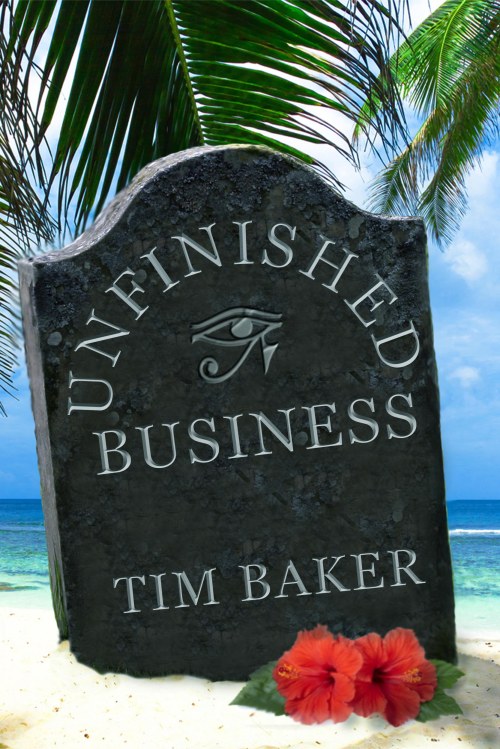 Unfinished Business has an interesting background. It was my first novel not to feature Ike and the rest of the Flagler Beach regulars. Ike makes a brief cameo – but has very little bearing on the actual story. 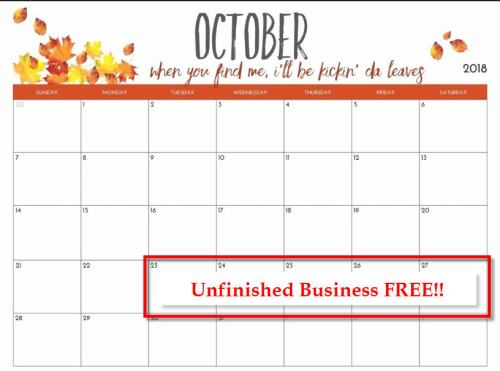 Unfinished Business is sort of the intersection of my usual stories – and The Twilight Zone. It involves a mortician who, for reasons unknown to her, must carry out the dying thoughts of the bodies she embalms.

One final thought…October means it’s time for the Fall Classic and this year my team – The Boston Red Sox – are in the World Series. So if they win there will be an additional giveaway coming your way!