Let’s Talk About Taking a Knee

One thing I’ve never been accused of is shying away from an argument – and judging by my six siblings (four brothers and two sisters) it’s a family trait.

However, I got some advice from a fellow author a few years back about engaging in hot-button arguments on social media. His tip was simple, and it made perfect sense…

To paraphrase; If you argue something really controversial you run the risk of alienating potential readers.

This was (is) good advice for an author trying really hard to increase his fan base – so I heeded his advice. Regardless of the topic (and let’s face it…there have been some whoppers on social media in the past few years) I kept my distance. I posted cute pictures of puppies, funny memes, useless trivia and the occasional “save the shark” comment – but I steered clear of the big three – religion, sex and politics.

One of the prime directives issued by my mother when I was growing up was to treat people the way I wanted to be treated.

As a white male I have been very fortunate to have avoided being mistreated because of my ethnicity. This does not mean that I don’t know it happens to others. It offends me greatly that people of color are treated as “less thans” in this country. The fact that I do not engage in racism is very little comfort when I see it happening every day.

America is supposed to be the place where “all men are created equal” and where there is “liberty and justice for all”, but it really doesn’t work that way…does it?

What makes it worse is when minorities attempt to protest the fact (that’s right – it’s a fact) that they are victimized – white America gets highly offended.

The most recent example is the whole “take a knee” protest.

It started (as most protests do) with one man choosing to make a statement. 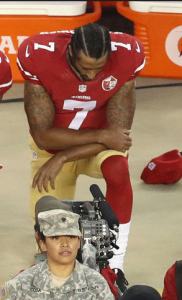 He didn’t go out and shoot up a church or fill a car with explosives and drive it into a building or assassinate a political figure…he did it by sitting down quietly during the playing of the national anthem before a football game. When asked why he was not standing and “honoring America” he said that (paraphrasing again) he wouldn’t stand for the anthem until people acknowledged the poor treatment of blacks in America. Eventually he was told by an Army veteran (who happened to be white) who sympathized with his cause that it might be better to kneel rather than sit. So kneel he did.

Labeled as a treasonous, spoiled millionaire.

Because he wanted to start a dialogue about the way law enforcement treats minorities in this country.

Unfortunately, the only thing people wanted to talk about was his “disrespect for the flag”.

This, to me, is the saddest, and most ironic point in the entire debate…

A man exercises his Constitutionally Protected Right of Free Speech and Peaceful Protest and he is vilified because he is “disrespecting the flag”, and by extension, the men and women who fought to give him that very right.

It’s a conundrum, wrapped in a paradox, inside an oxymoron.

Edmund Burke once said “The only thing necessary for the triumph of evil is for good men to do nothing.”

So – with that in mind, I want to go on record as saying I am taking a knee (albeit a symbolic one) to show my support for those who are only asking to be heard.

I accept that I may lose current readers and also potential ones.

The optimist in me says I might make some new ones in the process…so I got that going for me.

If you are reading this and I have offended you, it was not my intent…I am merely saying there is a bigger issue here that is being swept under the rug in the name of patriotism…

…let’s talk about that.