The Cowboy in the Basement

I was digging through the archives and found this gem. Written about 4 years ago – it was my response to a writing prompt from an internet writer’s group I belonged to at the time.

The prompt was to write about your earliest memory…

The Cowboy in the Basement

It is the faint, musty odor of the basement I remember the most.

As my mother hung newly-laundered clothes on the sagging rope strung between the chimney and the outside wall, I pretended the dimly-lit cellar of our three story tenement-house was the wild-west. It was a perfect opportunity to christen the cowboy hat and dual six-shooters—complete with embroidered holsters—I had recently received as a birthday gift (my fourth I believe).

With my four older brothers at school and my baby sister taking a nap, mom and I were alone in the basement. She was humming cheerfully while I kept a watchful eye for bandits or wild injuns, (whichever should happen to appear first). 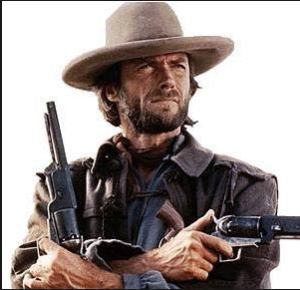 Bad guys were scarce that day; they must have heard there was a new sheriff in town, so I busied myself practicing my quick draw.

Suddenly the peaceful silence was broken by the squeak of the rusty hinges on the door at the top of the stairs.

Ever vigilant, I took cover behind the chimney, guns drawn, ready to mow down the varmint.

Footsteps thudded on the dilapidated wooden steps as the intruder slowly descended the stairs, completely unaware of his impending doom.

I peered around the side of the chimney. A shiny black shoe, followed by another, then legs clad in neatly creased grey pants and a pudgy body wearing a suit and tie. His neck bulged over the starched white collar of his shirt. His face had the complexion of a catcher’s mitt with diaper rash.

I didn’t know his name, but the chubby, bald-headed man was always around, I only knew he was referred to as “the landlord”. He also spent a lot of time at our church, which I assumed had something to do with the word “lord” in his title.

The landlord approached mom, she looked at him over the clothes-line and stopped humming. His voice was the harsh whisper of authority and he used words I didn’t understand. From inside his light-grey jacket he produced a handful of envelopes, thumbed through them and handed one to mom.

Her eyes looked from the envelope to the landlord and her usual strength was gone when she spoke.

With not so much as an “I don’t care” he turned away and walked away. My keen lawman’s eye alternated between the landlord shuffling toward the stairs and my mother, whose humming had been replaced by gentle sobs.

I didn’t know what he had said to her, or what was on the paper he had given her, I only knew that he had made her cry.

His shoes scuffled along on the dusty basement floor until he reached the steps. His pudgy hand, still holding more envelopes just like the one he had handed mom, gripped the railing and he hoisted himself up.

I raised one of my guns to my eye and took careful aim, placing the forward site squarely between his shoulder blades.

When I pulled the trigger there was a small click, but it was drowned out by the landlord’s heavy footsteps on the ancient wooden stairs.

So was mom’s crying.

One response to “The Cowboy in the Basement”