Another year comes to an end.

At the risk of sounding cliché – where the hell did the time go? It seems like just yesterday I was wondering what 2012 would bring.

2011 ended with the November release of the sequel to Living the Dream – No Good Deed.

When 2012 began I was working on Pump It Up, which I finished and sent off to the editor in March. The editor and I worked very hard on Pump, putting it through three solid rounds of edits. Judging by your response, the finished product was well worth the effort.

I also decided to release a print version of Backseat to Justice in 2012. It had been written in the summer of 2011 and released in e-version only, with half of the profits being donated to a dog rescue organization called Golden Huggs. I ran the book through a quick edit, commissioned a cover from the same designer who did Pump (Keri Knutson) and she came up with another beauty. The two books were released within two weeks of each other bringing my catalog up to five.

Not bad for three years. I was very pleased and thought 2012 was going to end up being a very good year.

Not so fast, it wasn’t over yet.

In April I had met Armand Rosamilia, another author living in my town. We quickly became good friends and, sometime around September, decided it would be fun to co-write a book together.

There were a couple of challenges; the first being our genres were miles apart. Armand is a horror/zombie writer and I…am not (for more information on my genre click here). The second challenge was writing this book, editing it and having it published before Christmas. We wanted to release it before Christmas hoping it would help with sales.

Long story short…we did it. We took three of my recurring characters (Ike, Brewski and Didi) and immersed them into Armand’s zombie world in Dying Days: The Siege of European Village. 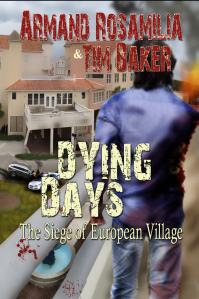 The entire process was a blast and Dying Days Euro had its debut at our “End of the World Book Signing” on December 21st, selling 48 copies in two hours. A success we hadn’t imagined.

I expect the first draft of my current work-in-progress Unfinished Business to be finished before the New Year begins. It should be released sometime in the summer of 2013.

Once Unfinished Business goes to the editor I’ll start working on my next novel. The question is – which one?

I have two works in mind…

The first I call Protect This. It will be the story of a man who feels his pathetic life can only be salvaged if he enters the witness protection program. The problem is that he hasn’t witnessed anything.

The second will be another Steve Salem novel (as in Backseat to Justice) where Steve and Val take on two unrelated cases. When things begin to heat up they have to figure out which case is the reason…and why.

There will probably be another co-writing effort with Armand, since we’ve already started talking about it.

So stick around, it looks like 2013 is going to be another busy year.

Tagged as 2012, books, end of the world, Tim Baker, Year in review, zombies